A Word of Appreciation From the Client

Gramener partnered Republic TV for the first time for an exclusive coverage of the Gujarat Assembly Elections 2017. The objective of the partnership was to do real time election data analysis on counting days with cutting edge analytics and visualization tools. The objective was to deliver the TV audience important valuable as election stories.

The partnership to deliver crystal clear election insights with real-time dynamic visualization continued during Assembly Elections 2018, and the General Elections 2019.

Election battles are a massive affair of interest for the general public as well as the media houses. News channels covering the elections with comprehensive data and narratives bags huge prime time viewership. In such a scenario, Republic TV needed a competitive edge while delivering election stories.

The Indian General Election is the biggest in the world. It involves over 300 political parties, 8,000 candidates, 800 million voters, and 1 million voting booths served and secured by 20 million officials. There is a variety of structured and unstructured information such as candidate histories, crime records, and declared assets to tap data from. In addition to this is the frenetic activity on the day of results. Live streaming of results happens while over 21,000 votes are counted each second, in all corners of the country, which spans an area of nearly 1 million square miles.

On the day the votes were counted, Republic TV had real-time data flowing in. This election reporting needed new analytics and visualization techniques to automate election insights discovery so that journalists can do what they are good at doing, but faster and better.

The whole project from ideation to execution was done over three-week period. A 10-member team consisting of designers, developers and testers worked in an agile fashion, building visual storyboards, iterating them based on input and making them ready for primetime.

Compass enabled real-time tracking of the party performance and swing seats. Here audience had a chance to observe the change in seats from one party to the other with respect to time. It highlighted the party that had been leading the previous three assembly polls in the constituency. 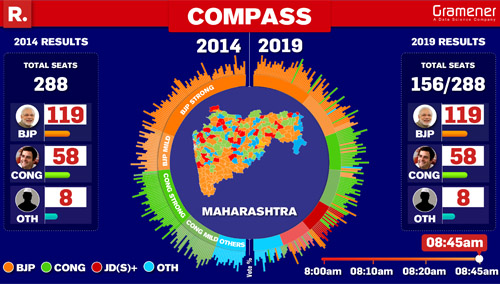 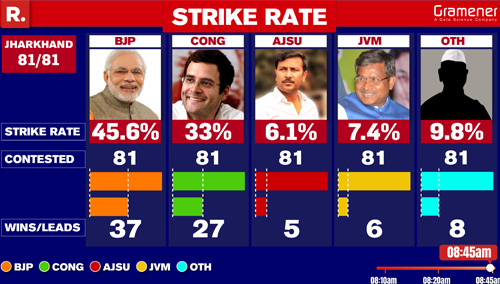 The Chord offered a visual analysis of seats gained and lost by the parties in the current elections compared to the previous elections. It showed a real-time transfer of seats from one party to another. 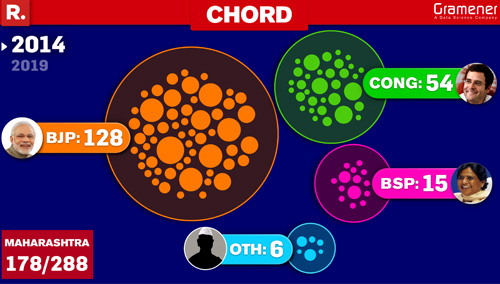 The color map is the combination of a pie chart and a map view breaking down the parties by color and applying region wise filters. Hovering on the colorful dots representing political parties highlighted the constituency name. 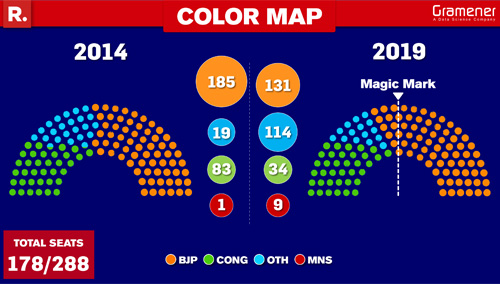 The Voter Matrix presented a timeline of leads and actual vote share in a dot plot format. It helped to track how the constituencies had gained or lost seats as counting progressed. 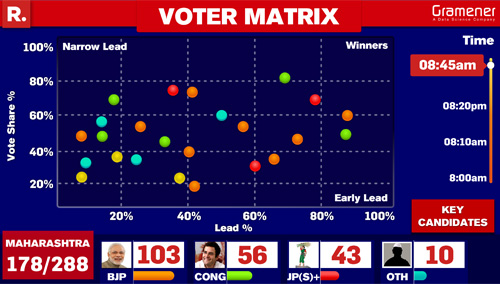 One of the most exciting storyboards, it was a post-result representation of winners and runner-ups, party-wise across seats. It was a perfect end to the nail-biting-close-fight scenarios from the election counting day. 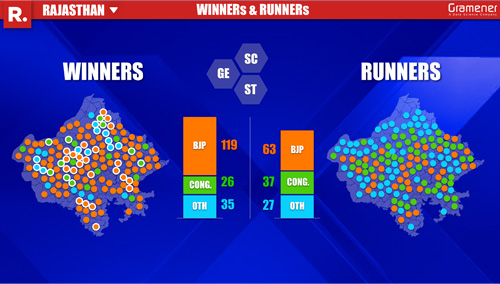 Shaping the flow of election data in real time

Visual data journalism has added substance to election reporting. The nature of election reporting has become number centric, with 60 years of data to draw upon. With Gramener's expertise, the indian public, especially the electorate was exposed to data-based reporting with hard facts and numbers, which are easy to consume as data stories.

Live data feeds need to be analyzed, visualized and data stories need to be reported real time on national television. Accuracy, speed and ease of consumption was put to test in front of the entire nation.

Gramener’s data science platform - Gramex, was programmed to develop an election results dashboard which were to meet these expectations. Particular care was taken to enable real-time slice/dice of data for deeper insights as they streamed in. It had to be a novel approach, far removed from plain reporting of live numbers which had been the norm until then.

It was not only a new era in election reporting, but it was an epitome of collaboration between mass media and technology companies. Charged with this confidence, Gramener is now getting into gear as another large democracy prepares to choose future leaders – The 2020 US elections!

This page lists public case studies. Authorized users can log in to see more. © Gramener, 2021
Gramener uses cookies to enhance your experience, to display customized content in accordance with your browser settings, and to help us better understand how you use our website. By continuing to browse or clicking on allow, you indicate your agreement. To learn more about the cookies we use see our Cookies Policy.